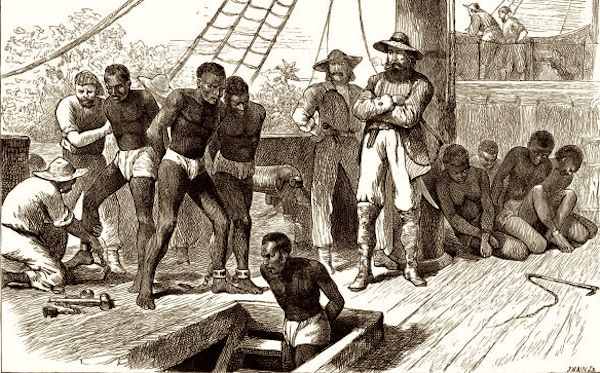 “Some slave owners sought to maximize their profits by skimping on the provisions that were given to slaves. Many slaves were expected to live by the old southern adage ‘root, hog, or die,’ which implied the slave was left to his or her own devices to find nourishment. Such circumstances often drove the slave toward small acts of resistance that were carried out with the aim of acquiring more food. As such, the idea of resistance as learned behavior that was inspired by purposeful mistreatment begins to take shape. Slave owners may have deplored slave resistance, but their poor management practices often served to foment such behavior.

Starvation was also one of the most brutal means of punishing the most recalcitrant slaves. At Elmina Castle on the Gold Coast of Africa (in modern day Ghana), those Africans held in captivity sometimes rebelled before thy were placed aboard slave vessels to be shipped to the Americas. For the most egregious offenders, a special cell was set aside where the insurrectionists would be jailed in solitary confinement until they starved to death. The muffled screams and howling cries of those who endured the painful death of starvation were clearly designed to be reminders to all other captives of what fate befalls the rebel.

Note, Labor is applicable to all work, professional or non-professional. For the purpose of this MDL analysis, all expenditures of energy contributing to production/service are included.

And the sign flashed bright in neon pink lights against the deep blue evening sky speckled with stars, and it sizzled brightly: